Get Worth Home | Reece's Rainbow

For the past few months, I have been pretty quiet on the fundraising front. I thought I was fully funded.

However, after checking and rechecking the numbers and talking with my family and wise friends, I have realized that I need more than I thought.

So it is back to the fundraising drawing board. Here's what we have so far.

The Puzzle Fundraiser is back! Lots of the world is still up for grabs, so claim your favorite spot while you can.

My son is definitely Worth the Wait, but boy is waiting hard! Snag a coffee mug or a cute shirt for the little one you waited for.

Have a heart. If you donate any amount to my Reece's Rainbow FSP, your name will go on a heart around Worth's map puzzle, and I will send you a traditional Martenitsa doll pair, which celebrates new life. (FSP needs to read $16,193 to be fully funded.) 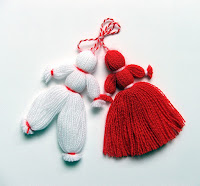 I have lots of new and used baby clothes for sale on my Facebook. I have mailers ready to fill with these cute little outfits and send your way!

But you guys. I am stressing. I am worried. I am scared and nervous. But I am choosing to believe that money will not keep Worth from his family. Some way, some how, he's coming home. Soon.

So much love, Elizabeth

Posted by Elizabeth Sherley Graham at 7:04 PM No comments:

It's been 149 days since I have written a post; the last thing I shared was the sheer joy of meeting my son.

I spent three wonderful days with Worth. And then I handed him to a nanny, who put him in a pack-and-play, and I turned and walked out of the orphanage door, tears streaming down my face.

For many of these past 149 days I struggled to find the words to express that feeling; that emptiness. Nothing seemed quite right. So this blog fell silent.

But then, on September 16, 2016, a judge on the other side of the world declared to be true what I already felt and knew.

I am Worth's mother. He is my son. Forever.

That was the best message I have ever gotten.

And just when I thought I couldn't possibly miss that little boy any more, the hole in my mama heart grew and my empty arms felt ever heavier. My son was waiting for me. With that longing though came a hope that, before, I was afraid to feel.

I'm coming, Worth! I am forever yours, just as you are forever mine.


Posted by Elizabeth Sherley Graham at 5:55 PM No comments:

The anticipation was unlike anything I have ever experienced.

Maybe it's the same when you're giving birth; I don't know.

My arms were suddenly hyper-aware of their emptiness. So many questions about the one who would fill them constantly ran through my head. I found sleep in little bursts.

And then it was time.

It had been raining all night, so the streets were almost flooded, but it was only drizzling when we left. We took a cab ride through the grey city streets, and all I could only think about seeing him for the first time. Would I recognize him? Would he cry? Would a nanny hover over us?

The cab pulled up to a nice little two story building. It was fenced in with a playground in the front. This was it. My son was here.

I focused my nervousness on avoiding puddles as we walked in the gate, then the front door. We were greeted by a friendly woman, who took us to the adjacent building. Again, puddles.

We walked into a room where I saw three or four children, older children. One girl rolled up to me in her wheelchair and pulled on my backpack strap. I smiled at her as I scanned the room.

The friendly lady reached down into a pack and play I had not noticed before. She pulled out a tiny little boy in a blue track suit. I saw his blonde hair and knew it was him. As she put him onto her hip, I smiled and reached for him, more out of instinct than conscious movement.

And he reached out his tiny arms for me.

I held him for the first time and stroked his hair. He was so small and so perfect and so mine. I felt him in my heart. My son.

We were whisked away into a play room where a nurse was eager for me to see his skills. He walks. He can climb out of the ball pit. He loves to clap his hands.

I oohed and aahed at each accomplishment, but really, he could have done none of that and still been just as much mine. Every time he was out of my arms, he tottered back to me. When someone else held him, he stretched out for me.

I think he knew I was his.

This morning was a joyful blur.

Here's what I learned:

He is a cuddle bug. Hands are his favorite; clapping his hands in front of his face, holding onto my hands - the best. He loves when I put my hands on the side of his face or stroke his cheeks. Running away and being scooped up. Kissing his picture in the photo album I brought. Blowing spit bubbles. Eating (I fed him three times!).

Toys are not his thing right now. (Note to self, stop buying toys.) I think this will improve with time, but right now, toys are used to hit himself or stick all the way in the mouth - sorry Friday the Sloth. The one exception were little plastic rings that you connect together. So fun to shaaaaaaake.

I noticed some breathing trouble. The nurse mentioned the rainy weather, but I am worried it is more than that. Definitely a priority when we get home.

Basically, he is perfect. All of my fears and doubts vanished as soon as he was in my arms. We have a lot of learning to do together. No question. But we will do it together.

On Thursday, April 21, I was sitting at lunch with my coworkers as usual. I was scrolling through Facebook on my phone and halfheartedly listening to the various conversations.

I got a notification for a new email, so I slid it down out of habit.

As soon as I read the subject line, I gasped and dropped my phone.

I had my written referral and it was go time. I was in complete shock!

I AM MEETING MY SON NEXT WEEK.

And so, so much anticipation.

In just over a week, I get to introduce you to my boy. What pure joy.

With much love and excitement,
Elizabeth 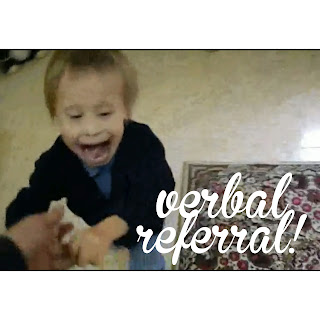 This morning (April 11) I woke up to an email saying the committee has accepted my dossier and I have verbal referral to adopt Little Dub!

In the next two to three weeks, the Minister will sign and I will have travel dates.

I am over the moon.

He is going to be mine and I get to touch him in just a few weeks.

When I was a kid (and even now sometimes), my parents would warn me: "don't make a mountain out of a molehill."

When I began Wren's adoption, I challenged you and me and God to move mountains, specifically financially.

And friends, that mountain is now a molehill.

I am in disbelief.

I have watched a mountain shrink and I really have no words, except thank you.

We are almost there. My little guy is so worth it.

Posted by Elizabeth Sherley Graham at 2:59 PM No comments:

So let's do a GIVEAWAY! 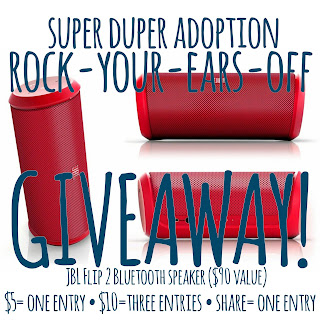 This bad boy is perfect for portable dance parties, workout sessions, or picnics and can play from your phone using bluetooth.

Here's what to do:

1. Donate to my Reece's Rainbow FSP or GoFundMe.
2. Screenshot/forward me your receipt.
3. BOOM! You're entered!

Wanna enter for free?? Share on social media for free entries (up to five)!

Giveaway drawing will happen once I have 100 entries!

Thank you in advance.

Love,
Elizabeth
Posted by Elizabeth Sherley Graham at 8:28 AM No comments:

In case you missed it...

When I began this adoption journey a year ago, I was staring at a whopping $30,000 that I needed to come up with some how. I had faith that... 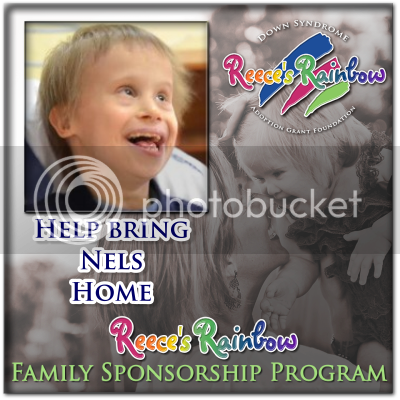 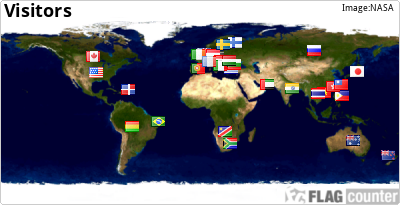